We finally decide that it was time for our big adventure to move away from Isle of Wight so on the 26th June we packed up Kindred Spirit and started our journey west leaving the Needles and The Solent behind.

We initially had good wind but as we reached Portland the wind died and to prevent us being sucked back into the race we started the engine and motored for 15 hours. The total journey to Plymouth took 26 hours and our first overnight sail (of many) was calm with a few dolphins following us from time to time.

We arrived to a grey overcast Plymouth , the story of our journey so far, and chose to stay in the Queen Ann Battery Marina.

We decided to explore the town of Plymouth and provision KS for our Channel crossing.  We were joined by our friend Nigel Snook who gave us a gratefully appreciated lift back to the marina. As Nigel left the marina it rained and the rain was to be the feature of the next 2 days in Plymouth. It made us focus on finishing work on the boat, rearranging the battery bank, servicing the generator, Allspars fitted an inner forstay halyard and diverter and  we arranged a Sainsbury’s online shop.

We had a lovely dinner out with Nigel and Pauline at Royal William Yard. And had a coffee on KS with another couple Alistair and Maria Forbes. They are also beginning their journey to the Caribbean aboard a yacht Manana.

Saturday 1st July finally arrived and this was to be final UK departure date. Nigel Pauline and their son Matthew came to wave us off and provided us with lunch, a couple of Cornish pasties, much appreciated later. We left in sunshine and wind behind but soon the wind increased and  become more in front of the beam. So with 3 reefs in the main and 2 in the jib we stared our journey south towards Camarat, a small town near Brest, this was to be our launch pad to cross Biscay.

Camarat is a friendly french marina and we stayed here for 3 days. It was built around a large fort and the facilities were located in intersting place! 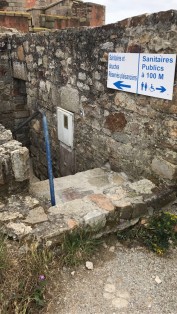 We stayed awaiting a suitable weather forcast to cross Biscay. We were keen to avoid a repeat of of previous crossing with Christian Reynolds on Northern Child with 35knots of wind and large seas.

We left Camarat 5th July and within an hour we had hoisted the sails, put a retainer on the boom and turned to our new helm to keep us on track, Vera,  our Hydrovane. She was really impressive and helmed pretty much the whole ways acrooss Biscay.

We made good speed initially 6-7 kts but soon the wind dropped and we settled to generally 4-4.5 kts. The wind was light during 90% 0f the journey and we soon got into a day and night routine.

During this journey we wanted to check our communication systems so on day 1 we started with iridium Go sat phone system. We phoned the family for a brief chat and ensure all conversations upheld radio standards, with the word “over” at the end of every sentence. this may appear a little excessive but there is a slight satellite delay. I also manage to download a weather grib file using Iridium go. Day 2 was to use  SSB radio and Pactor modem to download a weather grib file. This system also worked beautifully.

We did identify 2 problems that would need sorting in the near future our water maker  has a small leak. So instead of producing 32 litres per hour it actually supply’s 31 litres to the tank and 1 litre to the bilge. Another problem is that the radar would not power up. Raymarine have dealers worldwide so as the system is under warranty she will be fixed soon.

As for the sights, very few ships were seen both day and night but we did have visits from small and large dolphins and even spotted a whale, we think was a pilot whale.

After 75 hours at sea we eventually  spotted land but the final 4 hours to A Coruna appeared the longest. The wind built from behind and Geoff took the helm from Vera and enjoyed the sail towards land. But as normal with dinghy sailors we left it too late to reef and ended up surfing our 43ft ,19 tonne yacht into an unknown Spanish port. We spotted  Bajo bay and did manage to get enough shelter to drop the sails before entering Marina Coruna but  another lesson learnt, reef sooner.

So we made it across Biscay and we arrive at the marina feeling quite please with ourselves after 79 hours at sea. The next part of our journey will be day sails along Spanish and Portuguese coast.

We decide to stop here for 4 nights to re-provision KS and tackle some of the never ending list of boat jobs.

Marina Coruna is  a 10 min walk from the main town of A Coruna. On one trip out we walked towards the only chandlery that was 40 minutes away and bumped into Julie and Ian  Andrew, a friend Eastney Cruising Association, Portsmouth! Geoff and Ian raced 505’s worldwide  in the 1980’s. We met up again later that night and they explained they are taking their yacht  into the Mediterranean.

We haven’t managed many tourist trips yet but hopefully as the journeys get shorter we will get the bikes out and experience Spanish history and natural beauty.

View all posts by Kindred Spirit